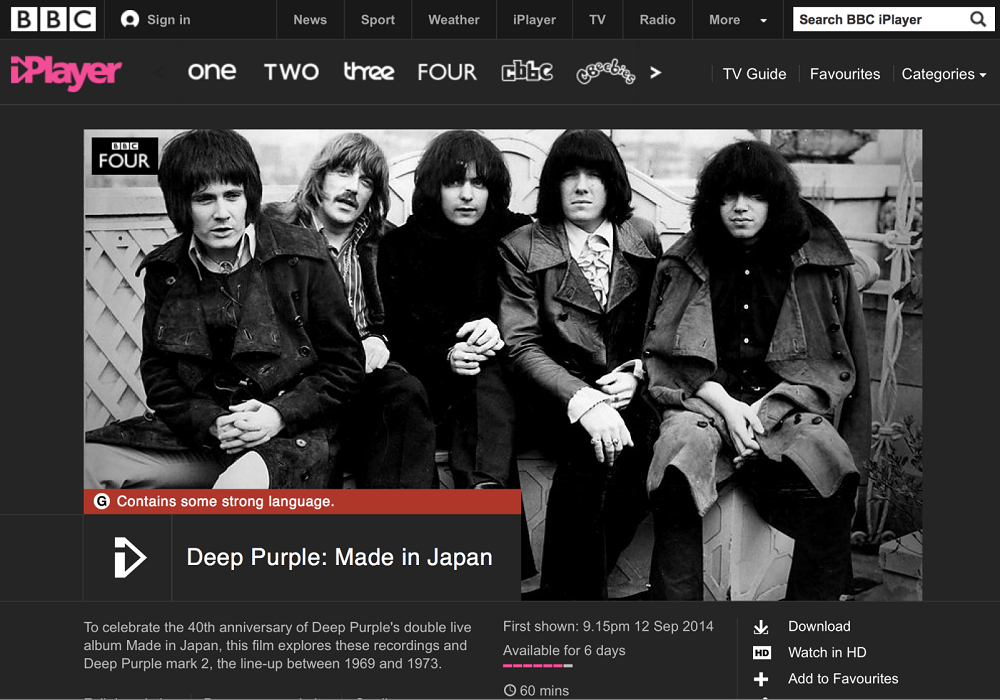 Deep Purple is one of the most influential and important guitar bands in history, one of the godfathers of the heavy metal genre, with over 100 million album sales worldwide to their name. To celebrate the 40th anniversary of Deep Purple's groundbreaking double live album Made in Japan, this documentary explores these recordings and Deep Purple mark 2, the line-up between 1969 and 1973.

The film highlights the mark 2 period of this classic British rock band featuring the classic line-up of Ian Gillan, Ritchie Blackmore, Jon Lord, Roger Glover and Ian Paice with a focus on the recording of the album Machine Head in Montreux, Switzerland in late 1971; the friction that developed within the band as a result of this recording and their incessant touring of the world in general and North America in particular; and the live recordings of the band's first Japanese tour in August 1972, released that December in the UK as Made in Japan, a Number 1 UK album. Lars Ulrich of Metallica has cited Made in Japan as his favourite album of all time.

Featuring previously unseen exclusive footage, this film promises to uncover the meaning behind the song Smoke on the Water, known for one of the most iconic riffs in rock history, and to reveal the background to the mystery that lies behind the three nights in Osaka and Tokyo during the recording of the live Made in Japan album from 1972.

This line-up of Deep Purple then split in 1973, with Gillan and then Glover quitting the band to be replaced. The classic mark 2 line-up would go on to reform twice more in the late 80s and early 90s and although Ritchie Blackmore left the band for the last time in 1993 and despite the death of organist Jon Lord in 2012, Deep Purple are very much active. Made in Japan has been ranked as the sixth best live album of all time, and this film goes under the covers to tell us why.