The Linn Sondek LP-12 is now an obsolete 1970's design that has had a number of mainly minor (in audibility, but not in cost!) improvements in the last 30 years. It is, by far, the most overrated audio component of all time* and it is also the most obvious example that, especially in the audio world, marketing skills are much more important to the commercial success of a component than its ultimate performance.

*Explanation- No other component has a performance gap as large as its proponents' typical claim ("the best in the world") and Reality.

While the Linn sounds very good, all of the turntables in the higher classes ("A" and "B") have noticeable sonic advantages, and some of them are superior to the Linn by a relatively large margin (for turntables).

These others turntables all have much more up-to-date designs. It is actually amazing that the Linn sounds as good as it does, but the Cetech modification, discussed below, demonstrates what Linn has overlooked and ignored all these years. This is the result of marketing trumping basic engineering.


What are the problems with the Linn?

The Linn simplifies* and homogenizes the music, and it is also noticeably colored compared to its competitors. The frequency extremes (especially the bass) are also substandard. This is the reason why Linn, and its dealers, usually stress focusing on the most basic and simple audio goals ("follow the tune" and "PRaT") when it's auditioned.

The Linn actually does "excel" in these areas. How?

This is because "the tune" and "the beat" will always be relatively easier to hear, in comparison to superior turntables, when the natural musical complexities have been compromised (by being subtracted). This ploy epitomizes the most cynical and misleading marketing strategies; those which turn actual weaknesses into "strengths".

*For those skeptical readers who require further confirmation of this characteristic, from an actual, well-known "Linn Lover" no less, you are in for a rare treat. There is even the added bonus of an excellent example of the use of The (Secret) Audio Reviewer's Rule No. 3D* (see "The Audio Press" file for the complete "Rules").

This is what Art Dudley (now with Stereophile) wrote about the Linn when compared to the VPI Aries/JMW 10 combo in Listener Volume 6 No. 2:

"The Aries' timbral balance is different from that of the LP12/Aro combination - the latter sounding a little more 'open,' the VPI making chords sound a bit richer, thicker, and more tonally complex. Which is right? Beats me."

Mr. Dudley didn't just come out and write that the Linn sounds "simple" by comparison. He also avoided* stating a clear preference, which should be a no-brainer in this particular instance.

My Many Linn Experiences

I owned my first Linn Sondek LP-12 back in around 1976. I purchased another one in 1979 after I realized I had made a serious mistake selling the first one (for a number of expensive direct-drives and then an Ariston). I greatly enjoyed listening to them at the time.

Since then, I (mainly my former store) have owned around 20 more of them. My most recent experience was around fifteen years ago (1999). I have heard almost every version, and in-depth.

I rarely receive letters like this, though I am obviously fully aware that many other "Linnies" feel the same way about me as this reader (if not even worse). Still, I'm posting this "criticism" to both expose the "thinking" of this hyper-sensitive "club", and to also allow me to make a direct response.

Please excuse me for mainly repeating what I've already written at length about the Linn Sondek many years ago. There's only so much new you can say about a now washed-up turntable design and its bizarre following. I realize that some people will be offended by what I write below. That is not my intent, but it's my basic nature to be direct and substantive, in spite of the consequences. There's been no editing to this letter, but it's my bold:

"Clearly, you have never heard a fully current LP 12 (2nd generation Lingo power supply; Cirkus bearings; Trampolin suspension; Keel sub-chassis; Ekos tonearm and Akiva cartridge). If you had, you would hardly call this obsolete. I can afford any turntable in the world, and I have heard several that cost double or more than a fully current LP12. And I choose the Linn hands-down for its neutrality, accuracy and musicality.

I have to wonder about the construction of your ego, that you get so much apparent satisfaction from your contrarian, if insufficiently informed, viewpoints. I can see you are a man who never lets the facts get in the way of his beliefs." (4/09)

First, let's get the Ekos and Akiva out of the way, so we can then focus on what is really important; the Linn Sondek Turntable and some larger related issues.

I don't doubt that the Akiva and Ekos are the best cartridge and tonearm that Linn has ever made, because they have a proven track record of improving their components over time. However, I rarely (if ever) find either component being used on any of the countless other turntables. That is the only critical test of their relative performance, and both components fail this simple test. In short, if either component had truly outstanding performance, audiophiles would be using them on a wide variety of turntables. They don't, period, even though they're very well-known, widely discussed, well-reviewed, easily purchased in many stores and their selling prices, while very expensive, aren't that much more than most of their competitors also claiming to be among "the best available".

Now, on to the Linn Turntable...

Based on the letter above, an objective person would never guess that the Linn Sondek has long been listed as a "Reference Turntable" on this website. In fact, I consider a used Linn one of the best turntable values around. So, where then does all the blatant hostility from this reader come from? Well, the Linn is placed in the "Class C" references, while there are other turntables that are in the higher "Class A" and "Class B". That may appear to be a superficiality, but to a Linnie, anything other than completely agreeing with their Eternal Mantra ("The Linn Sondek is the best turntable in the world, and will be forever"), is considered serious "fightn' words".

Let's look at some turntable history, or in other words, the facts...

I'll freely admit that it's possible that the Linn actually was "the best turntable in the world", though only for a short period in the 1970's. However, even that (now irrelevant) assumption is seriously disputed by all of the growing adherents of the vintage idler-wheel designs (which now even include Art Dudley* of Stereophile, once the "King of the Linnies"), with examples such as the Thorens TD-124, Lenco and Garrard 301. More to the point, even if you totally ignore the idlers, everything changed for the Linn, and all for the worst, between 25 and 30 years ago.

In short order, the introductions of the Goldmund Studio, the Oracle, the (large) Micro-Seiki(s) and the Townsend Rock turntables made the Linn design obsolete. I used that exact word back in the early 1980's (along with many other objective audiophiles, who could see and hear the obvious reality), and I still stand by it today. Those four turntables, as a group, had radically different, and noticeably superior, platters, suspension/isolation systems, bearings, clamping systems, bases and far less resonant parts.

History has proved us correct in our assessment. How? Virtually every serious turntable designed since that time, and especially those made today, has been an evolutionary step from those Big Four mentioned above (or the even older idler-wheels). Meanwhile, not even one serious turntable model made today is using the basic Linn design as a template, except, of course, Linn themselves. In short, if the Linn design is/was right, everyone else is/has been wrong (for 30 years). (Take a guess at what this reader believes?)

On a more subjective note, history also records that, one by one, serious, phono-oriented audiophiles, who actually made real comparisons, and made the effort to understand what a turntable was supposed to do (and not do), realized that the Linn was far too compromised to be competitive with the newest designs. This all happened despite the introduction of the most brilliant marketing campaign in audio history ("follow the tune" etc), which was created by someone who was aware of, and cynically took advantage of, the well-known insecurities, naivete and ignorance of most audiophiles. (If this reader had even a gram of human empathy, he would realize that I'm sickened by the thought of Linn's actions, and I receive absolutely no satisfaction from thinking and/or writing about it. 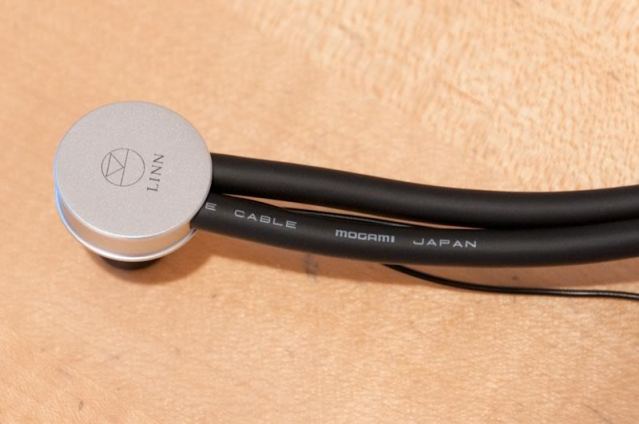 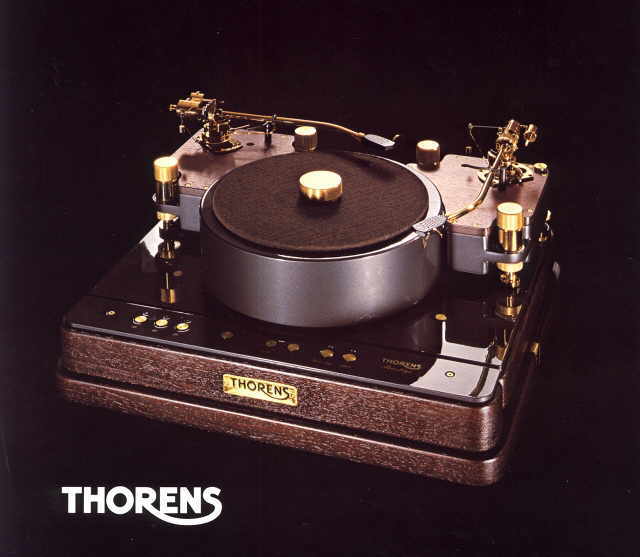 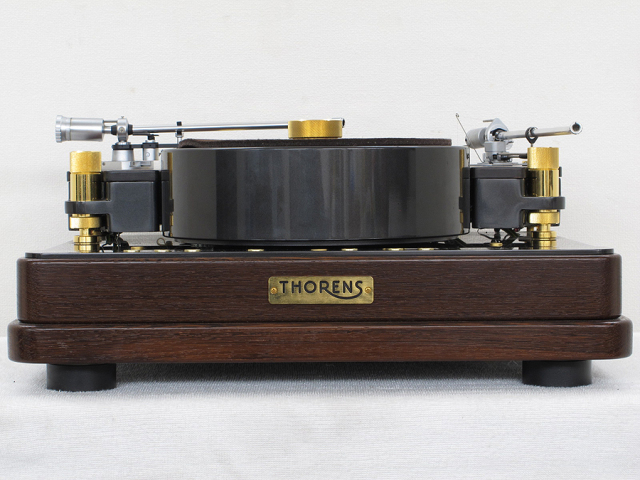 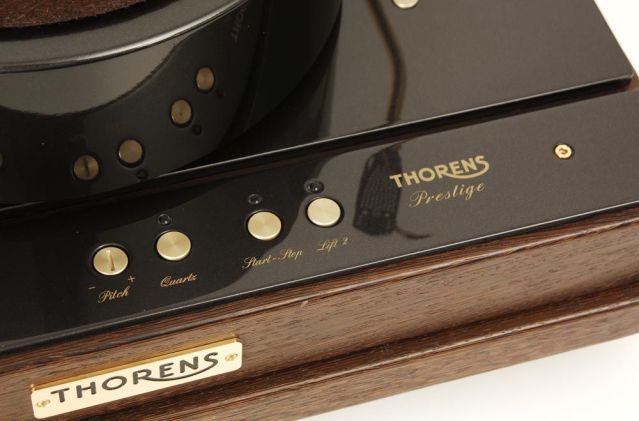 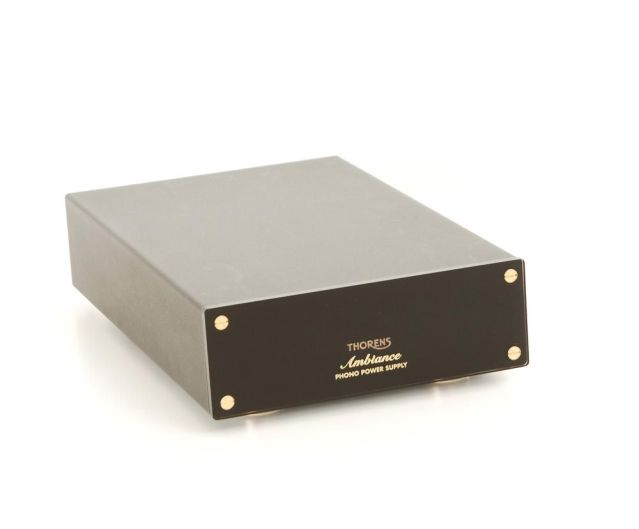 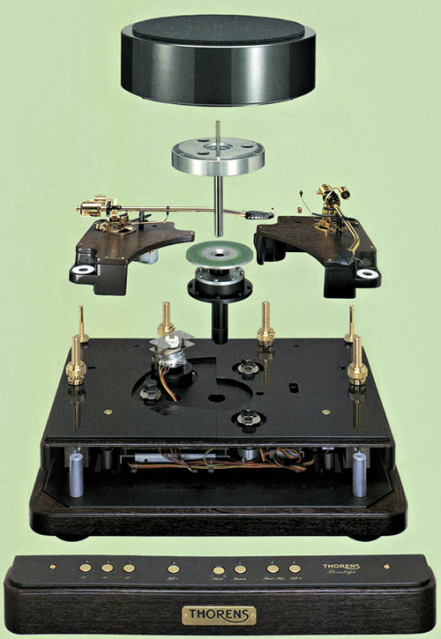 Thorens turntables are famous throughout the world for their excelient sound quality. The Thorens Prestige is the result of both a steadfast refinement of proven solutions and a commitment to a tradition based product philosophy.

A no compromise transcription turntable of the highest order without gadgets. The emphasis is placed on sound quality. Obviously the prestige incorporates the renowned Thorens belt drive floating chassis syatem.

The servo controlled two-phase synchronous motor, rigidly mounted on the main fixed chassis, drives the turntable by measns of a long soft rubber belt. Possible motor vibrations are thus isolated from the turntable and also from the two tone-arms on the suspended chassis. The mass of the turntable (over 8 kg including the centre stabilizer) accounts for the absence of any wow and flutter.

The large turntable (diameter 340 mm, height 100 mm) is absolutely resonance free and contibutes in a decisive manner to the stability of the sound image of the Prestige. The outer wall of the turntable is filled with iron granules, thus preventing any resonance of the casting material. A truly unique Thorens solution.
The turntable shaft is a very substantial 15 mm diameter precision machined componenet rotating wear free in an off bath.

Both the main fixed chassis and the floating chassis are constructed using multiple layer technology designed to eliminate undesirable resonances. All controls are located on the fixed front panel, the floating chassis supporting the turntable and the tone-arms decoupled by means of four point gravity controlled suspension.

Two large arm mounting platforms enable almost any tone arm currently available on the market too be used. The height of each mounting platform can be separately adjusted and each tone arm has its own electrically operated cueing device with front panel mounted lift/lower control.

The nominal speeds are quartz controlled and constantly monitored on the turntable itself. The underside of the platter bears a magnetic track. A meander conductive track forms the counter part to the tachogenerator, and an electronic control circuit compares the rotational speed of the platter with the nominal speed. The slightest deviations are registred and corrected. 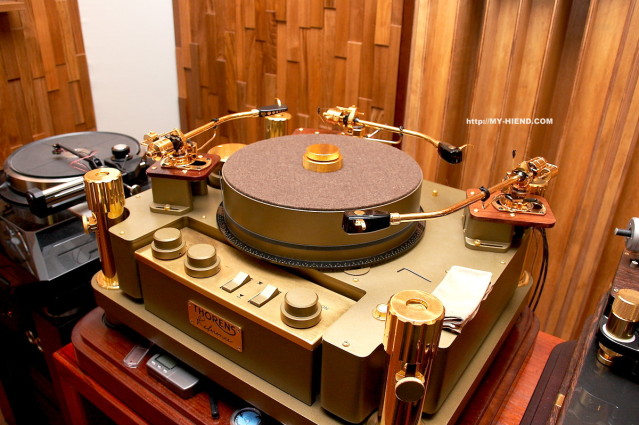 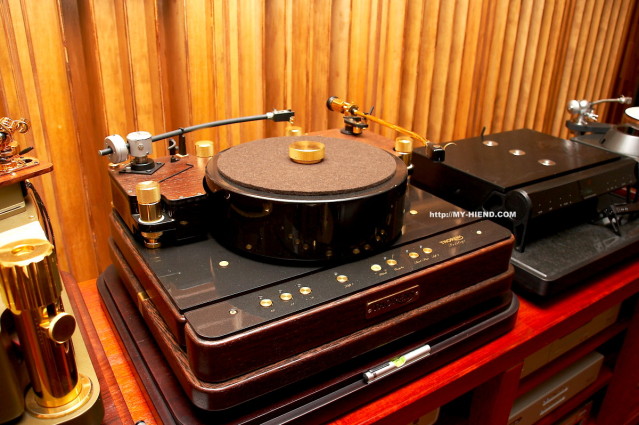 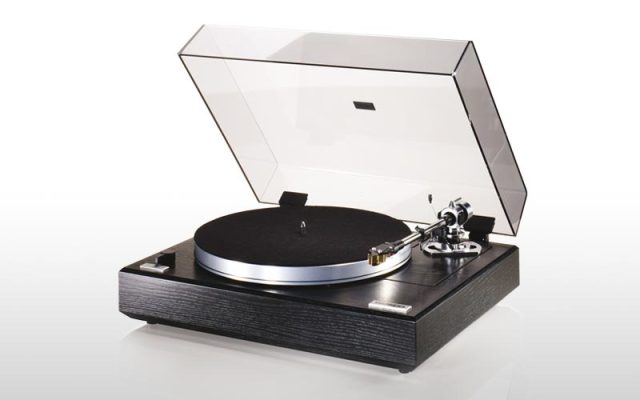 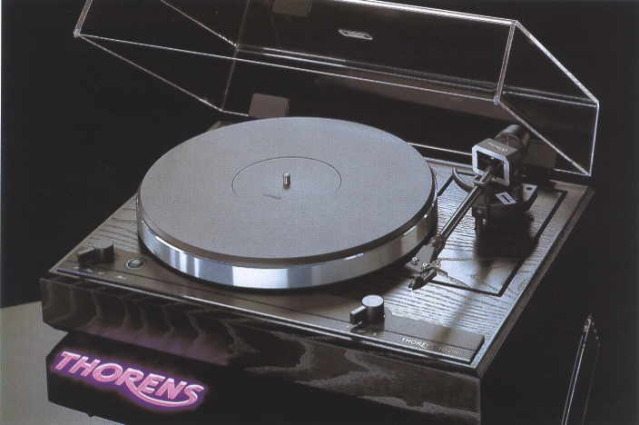 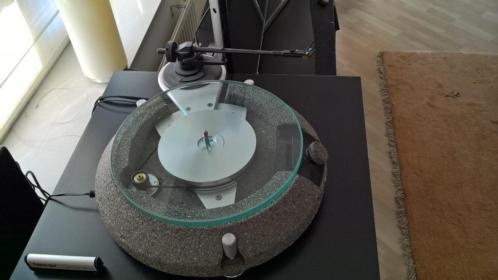