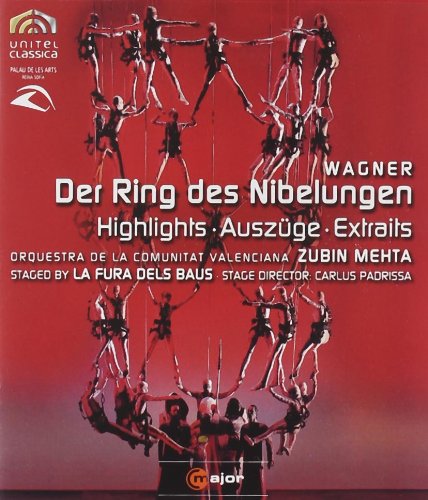 If it's a traditional approach to the Ring you want, in which dragons are dragons and stage directions are pretty much as Wagner requested, then this is the production for you. The sets, by Gunther Schneider-Siemssen, are based on earlier productions and fairy-tale book illustrations, and they look magnificent. The Rainbow Bridge is an impressive rainbow bridge and there are some theatrically memorable moments such as the fire being summoned. The production also happens, as you would expect at the Met, to have a first rate cast, from the impressive James Morris as Wotan to Dawn Upshaw as the Woodbird. Hildegard Behrens gives a powerful performance as Brunnhilde, Siegfried Jerusalem sings not just a touching Siegfried but enjoys himself as a crafty and mischievous Loge.
What Otto Schenk's sometimes perfunctory production doesn't have is the all-absorbing interest of some of the less conventional approaches. It is James Levine's powerful and emotional account of the score, as he draws some intense playing from an orchestra at the top of their form, which really lifts an otherwise safe and steady production.

Patrice Chereau's Bayreuth Centenary Ring may be more than twenty-five years old but it remains an iconic and defining production. Chereau very nearly did not direct it. A theatre director, he didn't know the Ring and didn't think he had time to stage it. Fortunately for us he did. Both he and conductor Pierre Boulez rethought approaches to Wagner, so much so that the orchestra threatened to go on strike if Boulez did not allow them to play the way they'd always played.
Chereau set the action in the Industrial Age at the time the Ring was written, relating it to the political thinking of the time and humanising the characters. Rheingold opens with the Rhinemaidens on the game by a hydro-electric power station; there is the striking image of the steam hammer from which the sword is forged, and liberal use of dry ice throughout. The cast was the cast of the day led by Donald McIntyre's frock-coated industrialist Wotan, and a redoubtable but touching Brunnhilde from Gwyneth Jones. Boulez pared back the music to, at times, chamber orchestra proportions. The result was a triumph which redefined Wagner production for the modern era and is still as powerful today as when first seen.

Hailed by many as the production which brought Wagner and Bayreuth into the modern, Harry Kupfer's 1988 Ring was one of the earliest productions to be recorded in High Definition (it was filmed in 1991). It's been issued on DVD in the original widescreen format and with surround sound taken from the Unitel recordings made at the same time.
It is an outstanding set both because of Kupfer's production and because of its young, vibrant cast. Anne Evans, proves you don't have to look like a Hoffnung cartoon to sing Brunnhilde, while the Wotan of John Tomlinson is sung and acted with impressive conviction. It was his first time in the role for Tomlinson, and also the first Ring Cycle for Daniel Barenboim (one of whose assistants was Antonio Pappano).
Kupfer's take on the opera was that it occurs at a crossroads on the highway of history, the meeting place of past, present and future. This highway dominates the set with laser beams used to create effects and location changes. As an approach it was certainly adventurous and pushed the boundaries. Just as Kupfer drew intense acting performances from his largely young cast, so Barenboim drew lyrical, passionate singing.

Kupfer was invited to Berlin in the late 1990s to remake his Bayreuth Ring. The subsequent production was later staged in Barcelona where it was recorded for television. While there are elements in common, this second version looks fundamentally different. The highway of life has been replaced by the ash tree from which Wotan pulled his spear. As the action proceeds and the gods' power wanes, the tree shrinks. Although the costumes look familiar, there's a more futuristic look to the sets (again by Hans Schavernoch), that is, when you can see them because much of this production is very dark. Once again there's liberal use of laser lighting, but it's not as striking as in the earlier production. The singing is always competent, sometimes very good. Falk Struckmann is an authoritative Wotan but a little prissy; there is none of the playfulness in his relationship with Brunnhilde (the powerful Deborah Polaski) one gets between John Tomlinson and Anne Evans. Bertrand de Billy draws some lovely playing from the orchestra but without ever getting totally under the surface of the music. Compared to Kupfer's own Bayreuth cycle, this lacks excitement. It is, and this is not a word one expects to use of any Kupfer production, ordinary.

The recent Stuttgart Ring was the first time apparently that a Ring cycle has been produced with a different director allocated to each opera. The results are, inevitably perhaps, uneven but never less than fascinating. All the directors went for an update. Das Rheingold is set in a 1930s health spa with Wotan chairman of the board, Die Walkure has him as a caretaker in a school. Siegfried (described by its director as a 'glum comedy') is played out in a kitchen/workshop in a run-down tenement block with Brunnhilde's rock a rococo bedroom. Gotterdammerung is being performed by a touring theatrical company and has a cunningly contrived ending that is a masterpiece of Brechtian alienation: Wagner's stage directions for the burning of Valhalla scroll up on a screen for the audience to read and interpret as they wish.
Not only are the directors different for each opera, so, too, are the casts and while most of the singing is quite acceptable (and occasionally, as in the case of Luana DeVol's Brunnhilde, very good) some is decidedly below par. The only common factor to the four productions is conductor Lothar Zagrosek. A safe pair of hands, he knows just when to let rip.

At the opposite extreme to the kitsch of the Met's cycle, comes Pierre Audi's production from Amsterdam, only the first part of which has so far been issued. Audi has done away with conventional sets and uses wood, metal, stone and glass blocks to create spaces in which the action can happen. It is a very technical production with something always being built. The placing of the orchestra is also unconventional. For much of the cycle, there is a vast runway from the stage around the orchestra and back to the stage, so that the orchestra is in the middle of the action. On other occasions, Audi has the orchestra actually on the stage. Both sitings give the singers occasional problems seeing the conductor and there is also some pushing to get over the orchestral sound. John Brocheler is, at times, a dry-voiced Wotan, but there is a striking Alberich from Henk Smit and the ever-reliable Graham Clark is Mime. Conductor Hartmut Haenchen doesn't hang around, driving the score forward relentlessly. But there's enough going on here to make one look forward to the complete cycle being issued on DVD.