Minnesota-based audiophile electronics manufacturer, Audio Research, accounted yesterday that they have been sold to Quadrivo SGR – the private equity firm that owns loudspeaker manufacturer Sonus Faber. Financial details were not reported for the deal but reportedly the asking price was between $1,000,000 and $2,000,000 for the company.


Founder, William Z. Johnson, will step down after 38 years of running the company but will still be involved in some design decisions. The remainder of the management team will remain in tact going forward.

It seemed evident that Audio Research will remain true to its audiophile heritage. The question of whether the new ownership would invest in bringing Audio Research into the world of multi-channel home theater was not answered in the release. 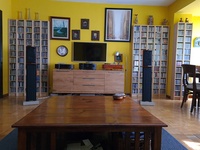